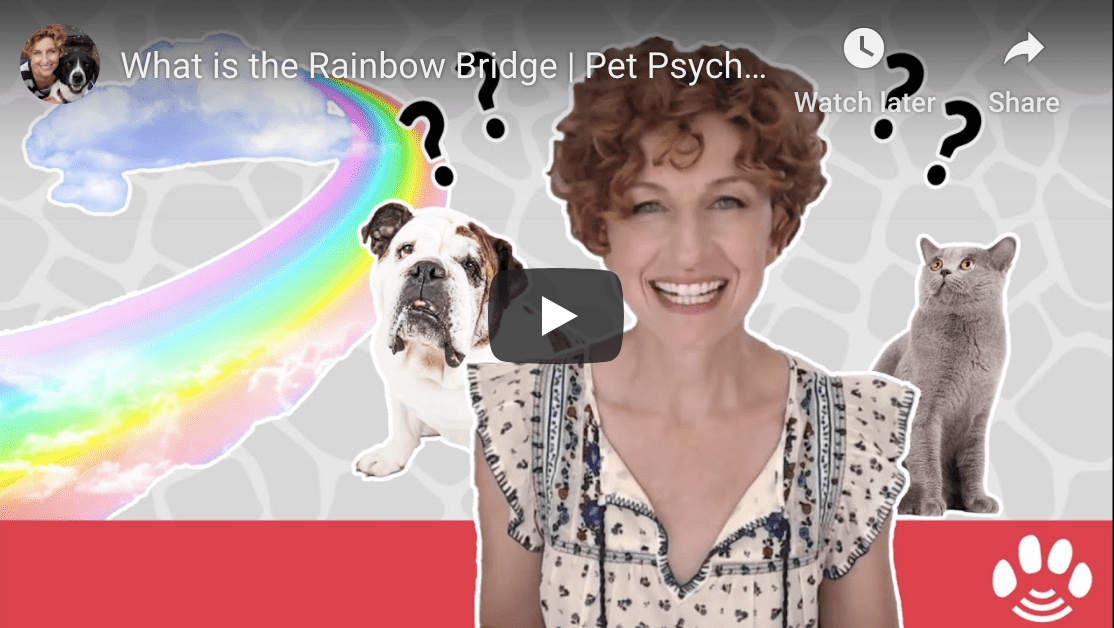 What is the rainbow bridge? (Video transcript below)

– What is the Rainbow Bridge? What do we do, what happens there? All of that kinda stuff!

My name is Danielle MacKinnon, and I am an animal psychic, animal communicator, pet psychic, whatever you wanna call it, and a plain old regular psychic as well. And in my almost 20 years of working with animals intuitively, I’ve had the opportunity for animals to tell me again and again and again about their experiences with the other side, about their experiences with us from the other side, and really what they’re doing and what’s going on.

What is the Rainbow Bridge?

And so, what is the Rainbow Bridge? What is this thing? And we always hear people talking about it. And I spent a lot of time meeting people who are grieving the loss of their animal, and one of the things that is really popular, like when my dog, when both of my dogs died in 2014, I was given a copy of this poem called The Rainbow Bridge. And it’s based on the idea that the animal crosses the Rainbow Bridge to get to heaven. And it’s a really wonderful sentiment, but is it real? And , the answer to that is yes… But there’s more to it than that.

When an animal crosses over, does the spirit leaves the body, hop on a rainbow and go? It’s really not that. It just doesn’t work like that. I love the idea of a Rainbow Bridge because the rainbow has all these different colors, which kind represents all the different ways a crossing over can be experienced. So, if I were to connect intuitively with an animal if I were to ask that animal about this Rainbow Bridge:  that animal’s going to tell me about THEIR version of heaven, the other side, the other plane, spirit world, etc.

Let’s say there is a dog who loves the outdoors, was an avid swimmer, big outdoor dog, liked to run. Well, if I connect with that dog on the other side, that dog is going to tell me something like, “There’s logs to run over, and there’s a bog, “and there’s a river, and there’s lot of bugs to catch.” That dog’s going to give me their personal  version of the Rainbow Bridge. Then I could connect with a different dog, a dog that was more of an indoor dog and didn’t like to go out and do those kinds of things. That dog’s gonna give me a very different version of what their Rainbow Bridge is.

Which Bridge is the Right Bridge?

I looked further into this because I wanted to understand why is one version of heaven like this and another version like that? And this was for all animals, horses, cats, amoeba even. Why do these versions differ? It’s hard, I’m going to explain it the best way that I can. I don’t even know how to say it. So, it’s like the other side is this energy. But our human brain can’t understand this perfection of energy. So, what happens is, instead, the animal puts this layer over that perfection of energy, which is the other side, so that our human brain can grab onto it and understand, and comprehend what’s going on.

The Fruit Roll Up Hypothesis

So, there’s this, it’s like a Fruit Roll-up. Guys, remember Fruit Roll-Ups? It’s like a Fruit Roll-Up layer that comes on so that when I’m connecting with the animal, I can get it. Because I, as a human being in a body, with my limited perception, just like we all have this limited perception compared to somebody who’s crossed over, I don’t have the skills, the experience, I don’t have anything to relate to where I could grasp what is really happening over there. So, this Rainbow Bridge is a beautiful way of, again, putting like a Fruit Roll-Up on this process so that we have something tangible to understand and grasp. That fruit roll up acts as a filter for our human brain.

What you can do

I teach people animal communication, and many student worry and fret about what their animal is doing  on the Other Side. Instead of wondering what they’re doing, connect! Ask for a message! Trust that they’re safe and sound and want to reach out to you as much as you want to reach out to them! Even when they’ve crossed the Rainbow Bridge, they can still definitely show up for you. In fact, I just did a webinar with somebody, and she said that her dog had recently passed a month ago, and she’d been getting all of these messages. And I said, “Well, what messages have you been getting?” And she said, “Too many to even remember all of them in the webinar.” And I said, “Well, you need to be writing “these messages down because we tend to discount them.” That’s it, okay, bye guys.

Want to learn more? Watch this video, “What happens to the soul of an animal that dies?“

You Don’t Have to Explain Yourself
Scroll to top