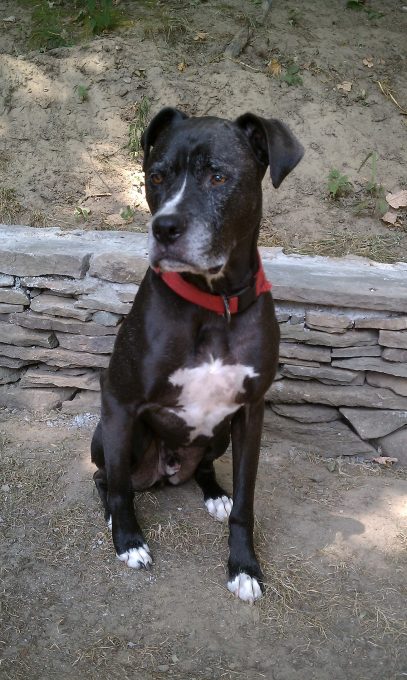 So many of you have been asking how my dog, Kelso is doing since his cancer diagnosis. I know I’ve been tight-lipped about this – but it was for no other reason than last week we were on vacation. My family and I have received your countless emails and phone calls – as well as healing energy from so many of you and we’re all so grateful! And finally, I can give you the update!

About a month ago, we brought my dog Kelso into the vet because he was having digestive issues. At that visit, our vet happened to notice a funny growth on Kelso’s abdomen area – right over his solar plexus chakra (belly button or power center on a human). Within just five minutes, it was confirmed that he has mast cell cancer and within a few days had his first surgery to remove the icky tumor.

In the first surgery, we received a call from the doctors telling us that they were not able to get a full hold on Kelso’s tumor and that were only going to be able to take a piece. We had to wait a week to hear what cancer stage the tumor was at (2) and how aggressive it was (1-2 on a scale of 1-10). The vet then concocted what seemed like a crazy scheme using a sharpie marker to try and triangulate exactly where the tumor was so that they could be sure and get the whole thing for his second surgery. Two weeks after the first surgery, Kelso has an ultra sound and then another surgery.

After that second surgery (in just two weeks!), we were told to give Kelso a very strong painkiller – as the piece that was taken out of him was very large (6 inches x 10 inches – yes, that’s right – INCHES!). So, we gave him the medication – but this turned out to be a bad idea. Like me, Kelso is extremely sensitive (I can’t even drink decaf coffee!) so the medication was too much for him. It took almost a week for him to stop standing in corners, and looking at empty spaces wide-eyed. When we would call him – he would look as if he was going to come to us, and then he would turn around and walk in the opposite direction. Our poor baby was so confused on that medication! Finally, on Saturday, the painkiller from the first day wore off and he was back to his regular ol’ playful self – full of pep and stubborness as always.

We’ve been waiting since that second surgery to hear from our vet – Julie (who has been so kind, caring and has really gone over the top for us) as to whether or not she was able to get clear margins. Clear margins (I’ve learned so much in this ordeal!) means that there is at least a 1cm buffer between the tumor and the healthy cells.

I just received the news that YES – we have clear margins!

As most of you probably already know, I knew there were clear margins before Julie told me. However, it was really wonderful to get that confirmation from someone who was looking at the physical reality – not just the energetic one!

So, thank you to everyone. You have all poured so much love and healing out to me and my family – and I believe that it was your assistant that helped us get to this place.

How Different Species Understand Each Other
Scroll to top