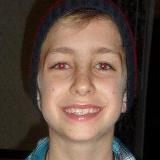 As many of you know, on January 21st, my 11-year old son Cole was playing in the state hockey tournament. The resulting moderate concussion could have been a tragedy – but read on to find out what happened…
.
It’s odd that Cole’s injury was called a “moderate” concussion – as it was nothing but. No school, sports, or leaving the house certainly was a challenge for my family. During the first four weeks he didn’t improve at all! He could study for only 4 minute increments, he was depressed, sad, and lonely. Somewhere at the end of week 4 though, I started to think about what was going on. Since we didn’t know anything about concussions, we were following the doctor’s orders to the letter – but wasn’t a concussion just stuck energy? And don’t I work with stuck energy every day in my business? Finally I decided to take control of the situation – and what resulted has been amazing.
.

First, I reached out to my friends and fans on Facebook. Yes, Facebook! I know it’s an odd thing to do, but it felt right. I asked everyone to send Cole some Love & Light. I was blown away by the response – and it triggered in Cole a lot of emotion. I began to realize that what I needed to do was help him release all of the emotion that had become stuck in his body and energy fields as a result of the “hit.”  I watched as the Love & Light coming from all of the Facebook’ers began to loosen some of that stuck energy. It’s funny but I didn’t think Facebook was (and is) a really, really powerful healing tool!

I also gave Cole some Bach Flower Remedies and had him take a bath in lavender Epsom salt. A friend had recommended which Bach Flower remedy would assist him in releasing the energies and I’ve always believed in vibration medicine to help in any transition. I couldn’t believe I hadn’t thought of it before! The Epsom Salt bath helped to kickstart his lymph system which was important in his body being able to heal itself.

One of my clients (thank you Maria!) turned me on to Jane McGonigal’s TED talks about how she healed her own concussion. Since she is a video game designer, she had also created a wonderful game (which you can even use on your iPhone) called Superbetter to help people heal themselves. When I showed this to Cole – he jumped on it. It allowed him to begin interacting with his friends again – and helped him feel good about the progress he was making. His smiling face helped fuel more of the journey!
I knew I needed to bring in an expert to help his body begin to kick into gear and remove the buried energies. I also knew that this buried energy functioned just like the energy that eventually leads people to create Soul Contracts, and I didn’t want Cole to end up creating contracts just to prevent himself from feeling the icky energies. My husband and I took Cole to see my friend Cindy who specializes in  craniosacral therapy and somato-emotional release. The idea behind this work was to give his body support as it felt safe to release the stuck energies. I’ve had this work done myself and it’s always been very helpful and relaxing, so I told Cole that he might fall asleep during the session. However, that is NOT what happened.

About five seconds after he had laid down on the table and Cindy put her hands on the back of his head, he began saying his nose felt weird. Next, his fingers were warm and his eyes felt big. He then started itching like crazy! The bottoms of his feet, his palms, his chest, his legs – everything began itching (the itching was one of the beginning signs that he was releasing the stuck energy). Suddenly, the side of his back near his kidney/liver starting cramping up. Then his leg hurt, and his foot. Next his head. I lost track of all of the different pains – but each “pain” or cramp indicated a different system within his body that was releasing the stuck energy. By the end of the session, he was tired and just wanted to sleep but the next day, he woke up bright, refreshed and happy. He said he felt more clear than he had in a long time!

Cole’s progress since we took control of his healing – and began giving his body the assistance it needed to heal itself – has been amazing. He’s begun singing again (he usually sings at whatever he is doing). He’s started drawing again and he’s been talking about what he wants to do when he grows up (wildlife photographer). Yesterday, he had his first home tutoring session and he went from only being able to study for 4-8 minutes 2 weeks ago to an hour and a half! We all see and KNOW he is healing!

Cole’s concussion has reminded us that, just because I may not know that much about concussions doesn’t mean that I (or Cole or my husband) have to turn our power over to anyone else. There are so many modalities, thoughts and tools that can assist! Tonight, we’ll be going for another crani0sacral/somato-emotional release session. I can’t wait to see what Cole’s body chooses to release! I love watching Cole’s higher self, soul and body work together to allow him to access once more his original state of perfection.

Thank you again for your outpouring of support for my family. The love from all of you has been overwhelming and we (my husband Kevin, Cole and I) couldn’t be more grateful.