When My Dog Died I Saw His Spirit Above His Body

My Dog Died and It Helped Me

Kelso, my dog, died several years ago. Although I still grieve for Kelso and miss him dearly, what I experienced through his death profoundly changed me and helped me become the person I am today. I believe that I would not have a thriving school of animal communication that I do, if Kelso hadn’t given me the gift he gave me through his passing.

In order to fully understand the domino effect that Kelso’s passing created, you need to know about my job. As an animal communicator (pet psychic),  and teacher I connect with animals intuitively for work. I love teaching people how to do this (through my Danielle MacKinnon School) but, as the time of Kelso’s passing, I didn’t connecting to my own dogs. I didn’t trust myself with my own dogs. Ask me to connect to YOUR dog, I was great! But connecting to my own dog was another story.

It started with seizures

The Monday before his passing, Kelso began experiencing seizures. The first seizure happened while he was upstairs in my office. From downstairs, it sounded like he had pulled something down off the shelf and was hitting it on the floor. It turned out his body was seizing. Our vet determined he needed surgery to remove the two bleeding tumors attached to his spleen. There was no part of me that wondering if my dog is dying. I did not intuitively check in with him. I was too upset.

The day of Kelso’s surgery, Kelso was wobbly, dizzy, and sedated because of the anti-seizure medication. I took a moment to intuitively check in him and saw that his energy slightly out of his body. I have a video about how the spirit leaves the body that you can watch here.  (The spirit of an animal back out through the bum of the animal. The spirit then completely detaches from the body at the moment of death.) At the time, I questioned my connection to him and thought I must be making that up because of my worry for him. Before Kelso went in for his surgery, my husband Kevin and I took time to hug him and say goodbye – but we thought we were just being dramatic. I continued to disregard what I had seen in Kelso’s energy.

After Kelso’s surgery, we transported him to the overnight facility, thirty minutes away, for monitoring. While we were waiting to talk with the vet, I connected in Kelso. This time I saw that his energy was halfway out of his body.  I thought, “That’s so weird! Kelso’s energy is 50% out of his body. That’s just what Bella’s energy looked like the day she passed.” But it was a very fleeting thought that I gave no more consideration to. I just didn’t trust my intuition so I ignored what I saw.

We filled out the rest of the paperwork, including one form that asked us to check a box. DO NOT RESUSCITATE or PERFORM CPR. We checked the latter box. I kept thinking about it  thought and eventually told Kevin that I wasn’t sure it was the right decision. He said he’s been wondering the same thing. 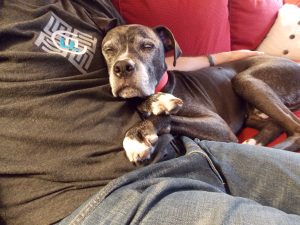 When we arrived home, the vet tech called us to let us know that Kelso’s body was shutting down and they were performing CPR. They told us we should get back to the facility as soon as possible.

As raced in our car back to Kelso, I started to realize I had been ignoring the intuitive signs of his passing all day.  Kevin agreed. When Kevin called to say we were on our way, he also told them to stop taking drastic measures. We heard the tech yell to the back room, “Stop resuscitation per the owner!”

During the drive, I decided to do another intuitive check-in on Kelso. And this time, I was determined to trust. In my head, I tapped into the clairvoyant image that Kelso was giving me. I saw the room we left him sleeping in, but he had been moved out of the cage and was laying flat on the floor on a blanket. I saw people moving about around him – and then I noticed one significant thing. His energy (otherwise known as his spirit) was barely attached to his body. In fact, his energy was up by the ceiling looking down on the whole scene of activity, connected only by one thin line.

I told Kevin, “I think he has passed – or he’s just about to pass. His energy is looking down on him.” And I believed this. Finally.

My Dog Died Exactly The Way He Wanted

Through my intuitive communications with animals as an animal communicator, I’ve learned that animals choose their passing. (Learn more about this in my Youtube video.) They decide the timing, how, where, and even who is with them. Their intention is to help us evolve and grow, even from their passing.

I started crying to my husband, Kevin, “But WHY? Why would Kelso choose to pass without us there? I can’t figure out what we could possibly learn from this?” It didn’t make sense! My dog died and I was going to be more confused than ever! 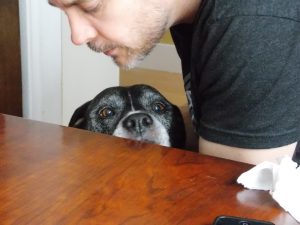 When Kevin stopped the car in the driveway of the overnight vet, we burst out and ran. As we pushed through the glass doors to the building the tech ran up to us, “there’s still a heartbeat. Come this way!”

When My Dog Died

THIS MOMENT makes me cry, even now, many years later.

Kelso was on the floor in the area exactly as I had seen him intuitively in my head fifteen minutes before.  He was surrounded by five women, all touching him, loving him, and supporting him as he went through his transition process.

I took a breath and looked up above Kelso’s body and the women.  And there it was: his spirit was right where I saw it psychically, hovering near the ceiling.

As the helpers moved out of the way for us, my voice took over. “Hi. We’ve already said our goodbyes. We don’t want him to suffer. We want to help him cross right now.” Kevin and I bent down over him and touched him and rubbed him. His heart beat was so faint… he was just barely alive, but he was alive. He had waited for us so that we could be there with his for his last breath. The thin strand of energy that had been connecting his spirit to his body gently dissolved away.

Kelso was teaching me right up through his last breath. This experience gave me the confidence to trust my animal communication skills with my own animals, even in times of turmoil. I ignored the signs he was giving me until I finally couldn’t. Today, I have become a more confident animal communicator with my own animals and I love helping people learn to trust their pet psychic skills enough so they can use them with their own animals.

For me, the day my dog died was the day that I began to fully trust my animal intuition for MYSELF.

The Different Types of Soul Co...

5 Reasons NOT to Open Your Psychic Senses