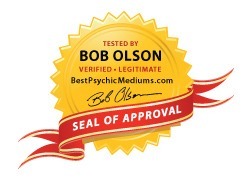 Bob Olson has tested hundred of psychics and psychic mediums from around the globe. Some readings were terrible, some good, some great, and some were absolutely extraordinary. Over time, Bob has analyzed and compared these readings to determine what criteria differentiates the terrible from the good from the extraordinary. In fact, he is the only psychic medium expert who is not a psychic medium himself. Moreover, he began as a cynical skeptic, so he understands the important of evidence-based readings.

Today Bob Olson has revealed his list of the most gifted psychic mediums he has discovered along his journey! He calls it his “Genuine & Legitimate Psychic Mediums List.” These are the psychic mediums he personally recommends to his own friends and family members.

Read what Bob had to say about his Soul Contract and Animal Communication readings with Danielle here. (It’s good!)

Soul Contracts That Bit Me…