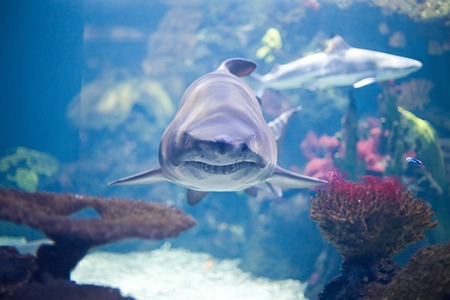 What do you think when you read this headline from an article on Mashable?

“Five hungry sharks eat whale carcass in terrifying footage. It’s a shark feeding frenzy. This is the stuff of nightmares.”

Don’t you immediately start feeling threatened by sharks, worried that their nasty nature is to hunt you down and eat you? Do you start to imagine these evil sharks, bad tempered, lurking everywhere in the water, waiting to get you?

I’ve been noticing this dramatizing trend a lot lately on the web but also in my own home. This weekend, my husband took down a hornet’s nest. Now, I certainly understand that we can’t have hornet nests around the pool, especially when we have a whole bunch of teenagers running around, but when I asked Kevin why he did it the way he did it (spraying this poison on the poor hornets who were gasping for life on the pavement) he said, “those bees are really NASTY! It was the only way because they are so mean!”

All Animals Have Mastered Unconditional Love

I mention often in my classes, books, and events that animals have mastered unconditional love. And it’s true! This is why animals can move through their tough times more easily than humans. We tend to hang on to things whereas an animal’s natural state is actually to learn from the experience and move on. In human terms this would be called forgiveness – in animal terms, it’s simply surviving in a challenging world.

But when I talk about animals having mastered unconditional love, someone will inevitably raise their hand for clarification.

“Not ALL animals, though right Danielle? Not lions and sharks and pirañas…”

What I’ve learned from the animals in my many years as an animal communicator is that every single animal, bird, insect, fish… has mastered unconditional love.

The lack of understanding comes from how some people define unconditional love. It’s easy to see how a puppy has mastered unconditional love because they fit in with our human version of it: cute, loving, cuddly…

But unconditional love is about more than that! And so are predatory (ie bad) animals!

Unconditional love is about not just about being loving, it’s about balance too. And there is an innate balance in the natural world. One where sharks and lions kill their prey. It doesn’t make them bad animals. It makes them a part of a beautiful, big picture balance.

So, my choice to use the word “nasty” to describe the hornets that he kills wasn’t really fair. The hornets are just being hornets, defending their part of the balance. And that can’t possibly make them bad animals, right?

Weren’t those hornets just doing what evolution has taught them to do? They were protecting their home, their babies, and their well-being. Yes, they protect themselves by burrowing into wood to create a safe home and they attack and try to sting anyone who violates that – but it is not because they are mean or nasty. It is because they are in a life or death situation and they’re fighting tooth and nail (or stinger) to survive. I don’t believe that bad animals exist at all. Every animal has a physical purpose here on earth and makes some type of contribution to the overall physical, energetic, and spiritual balance.

Fighting for Survival is Real – It’s the Balance

Have you ever had to fight for survival like a hornet? Did you use every single tactic available to you? Do you think your fight to survive makes you bad or evil?

Animals are not mean or nasty and they certainly aren’t evil.

How many times have you heard, “Oh! Stay away from geese. Geese are nasty!”

Are geese really nasty? Or are they just doing what nature taught them to do – protect themselves? Maybe we could re-write our perspective on geese to, “Wow, look at what great, protective parents geese are. Parents of the year!”

So, while I may not want to hang out with geese because I’ll always remember how one chased me away from the water when I was 5 and I may not want to upset a hornet’s nest because I don’t want to be stuck, I respect and love these for who they are.

What if, instead of the headline above, that Mashable article actually read:

“Five happy sharks happen upon the biggest meal of their lives! Have a grand time eating and rejoicing over their awesome food find!”

How animals behave toward me does not affect my feelings about them – I know they are just doing what they’re supposed to do. Every animal, insect, and bird in the world doesn’t have to “be nice” to me in order for me to feel that love for them. My love of animals is unconditional – no matter what the natural order of that animal is.

And do you know what is cool about this? I’m seeing more and more people in the world who feel the same way I do. Hooray for the evolution human’s views on animals, love, and how to work with and respect the earth!

Do you love animals? You might enjoy this article by Danielle: Does My Cat Know How Much I Love Her?

Cecil the lion is dead. What does it mean for the human race?
Scroll to top