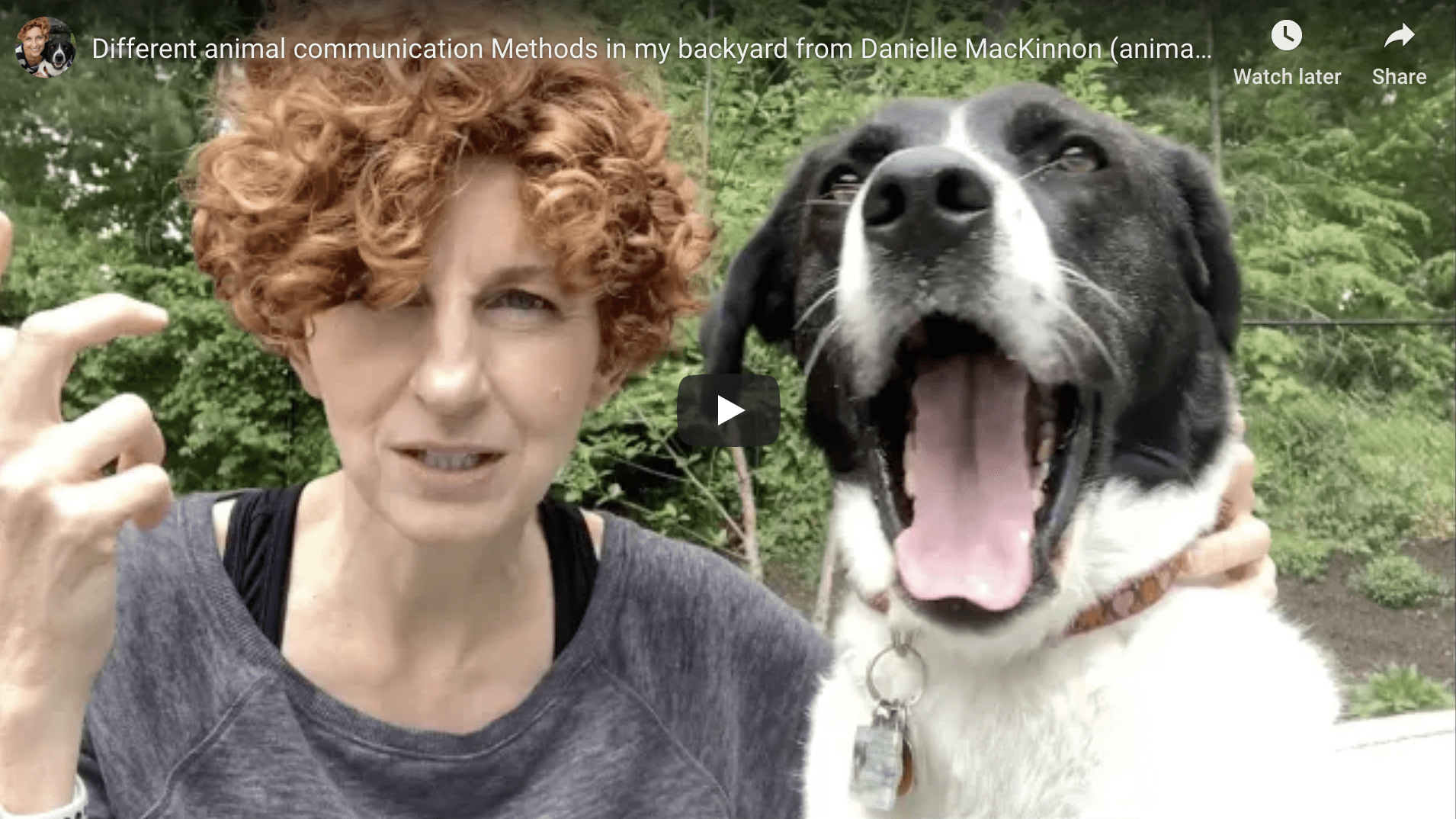 **Note: video has closed captions AND the transcript is lower down on the page too!

Behind the Scenes of My Different Kinds of Animal Communication Video

(KEEP SCROLLING FOR TRANSCRIPT OF VIDEO)

A lot of people have gotten in touch with me about this video as they were excited to learn that connecting intuitively with their pet could be simple (no fancy prayers or tin hats required!).

HOWEVER, there’s actually something more to the video that happened behind the scenes that I want to share.

When you watch this video

When you watch the video, you really get to see my dog, Tuukka, reacting to my connection, reacting to the energy that I’m in as I’m filming the video, and even sticking to her guns, psychically, because she wanted what she wanted.

And so, the video made me feel kind of bad… (I was just trying to demo my animal communication method and Tuukka chose to teach me something!)

I always teach that it’s just as possible to connect with our own pets as it is to connect with an animal outside of the family – I just say that it’s harder to trust. And this is completely true! BUT, after making this video, I realized that, since it’s harder to trust, I don’t connect intuitively with Tuukka as much as I do with pretty much any other animal I’ve ever encountered.

I think it’s because I was, deep down, avoiding the whole “trust” thing

Tuukka, though, clearly wanted me to see that I could trust her. This is why she was SO good for that video. She was great intuitively (as always) but she was also great on the video – hamming it up (with the yawning, licking her lips etc at the most appropriate times…)

So, through this one little video, Tuukka was able to remind me that i STILL have things to learn about my intuition, there are STILL places where I don’t totally trust, and that I can always improve.

Setting Tuukka Up for the Connection

I wanted to say this. And it’s hard to line up Tuukka because Tuukka is not really interested in being on camera. This is not what she’s all about. However she’s holding very nicely right now but it’s because I have her orange ball.

So the interesting thing was, this woman, when she connected in, she would connect in and then it was almost like she was channeling what her dog was saying. And so it’d be kind of like a low mumbling and then she’d tell the people in the video what the dog had said. And it’s just so different!

So when I’m connecting in to Tuukka, I’ll get silent for a moment and I’ll do that now. And so what I did is I sent my intention to her to connect in. And if you notice, she kinda closed her mouth like, hmmm. It looked like she felt that connection. It’s pretty easy when you trust that you’re doing it.

I have a certain technique that I use for doing it, but I just wanted you to see, it’s not a big, challenging hard thing to do. You don’t have to get into you know, some people do meditate to do it, I don’t meditate to do it, I’ve been doing it so long that my body just basically goes right into it and does it.

Going into the Connection

So now I’m going to take a moment and I’m going to connect with her and ask her if there is anything that she would like to tell me. And here’s the funny thing. Yeah, so that literally just, okay… So as I was saying that I was already starting to connect in to ask her by saying, “Hey what do you want to tell me?”  She was already saying, I would like to, it’s the ball. I want to play with the ball!”

A Break in the Different Animal Communication Video (On Pause….!)

Well, we had to take a break because I had to throw the ball for Tuukka! And she’s not all that excited right now to be here.

Back to the Animal Communication Video connection

When I connect with an animal, and Tuukka in particular, but any animal, I’m connecting through my intention. And it’s my intention that is making the connection happen. Because animals have this ability to connect in at all times. So they don’t have to do anything specific to connect in.

Now the way I do it is, it’s silent. So I’m going to go and I’m going to talk with Tuukka again and I’ll have you watch, hold on.

Okay. So she said that making this video is making her tired. And she would just like to get on with it and play with the ball. The ball is her favorite thing in the whole world. She’s giving me feelings of impatience. She’s also giving me words like in a sentence form. Such as “I just wanna play with the ball,” and “I’m feeling tired.” Both of those are things that I heard.

Tuukka is a really good communicator. She’s a very clear communicator because that’s what her personality is. This is a dog who makes it clear what she wants. And she’s very quiet and kind and silent about it but this is how she is in really life so it is actually also how she communicates.

So I wanted you to see how it worked when somebody else did a communication, I just want you to know how many different ways there are to communicate with animals. There’s no one way that’s right.

OK, so I don’t think this video would be complete unless I threw the ball for Tuukka. So we’re gonna do that now. Are you ready? Okay, here we go. You can see, come here, Tuukks. Okay, ready? And that’s it. All right, bye.

Subscribe to my Youtube channel for more cool videos or come learn my method of Animal Communication here (instantly!)

Is it time to euthanize my dog quiz

Signs from Pets in the Afterlife
Scroll to top