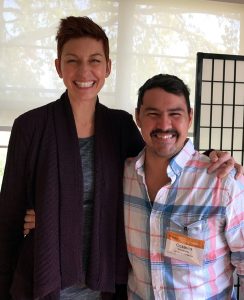 Part 2 OK, let me start by saying, I’ve been thinking about writing this email all night (guess I needed to do my own energy management)! If you didn’t read yesterday’s “Uh… Excuse me” email, what I’m about to talk about might not make total sense – so be sure to go back and read that here.

This morning when I woke up (I’m still here at Kripalu teaching my week long intensive in Animal Communication), I checked my email and had the most beautiful surprise!

TONS of people had responded to yesterday’s email call for encouragement for Octavio and my assistant Colleen had put them all into a document so I could read through.

Woo hoo! How exciting! I can’t wait to get class to show Octavio! I don’t even know if I’ll have time to read them all to him as we also have to do a lesson… 🙂

Anyway, if you didn’t yet read yesterday’s email – the quick summary was that one of my students, Octavio, was really struggling to connect intuitively to the animals we were working with. The animals were giving him the same amount of respect intuitively that people would often give him in real life – which was not very much.

But when he arrived to class yesterday, I set about teaching him the Construction Worker tool. (Yeah, I know – crazy name, but it works. Really!)

So, the Construction Worker tool involves shifting your energy so that you can walk with the power and confidence of a construction worker – one who knows what his/her job is, knows where he/she is going, and what he/she is setting about to do.

I don’t think that, when Octavio heard this, he was all that excited about trying it out for himself – especially with the whole class watching.

But, a little nudging and he was in. He was going to try it.

First, he did his normal walk across the room. We all watched as he shuffled from one side of the room to the other – all while looking down to itch his nose. (Don’t worry! We’re laughing about this now!)

Next, I had him stand with his eyes closed and imagine the power, confidence of a construction worker. I said, “OK Octavio! Imagine there is a board and a piece of wood across the room and you’ve got to go nail that thing!”

He picked up a pen (to use as his hammer) and he started walking. The total walk was about 15 paces.

At first, he was a little slower and his eyes were facing downward – but by the last third of the walk, his head was held high and he was ON IT. His entire demeanor changed.

One of the other students watching remarked, “I think he can go out and get a date with that walk!” an another said he reminder her of John Travolta in Saturday Night Fever (a movie).

Anyway, I think you’re getting the picture – he GOT it.

And not only did he get it – he went on throughout the class to experience communications with the animals that were blowing him away each and every time.

Here’s a pic of Octavio and I toward the end of the day. I don’t think I have to say much more!